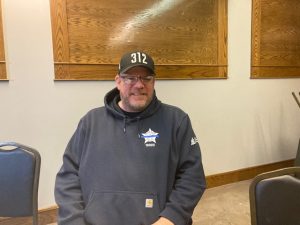 Fox’s Pizza, Guinness, the Cork and Kerry Irish Pub and Flood Brothers Disposal present the Hibernian Radio Hour as we continue on our First Responders Tour at The Cork and Kerry Pub on Western Avenue and this week we welcome 29 year Law Enforcement veteran Kevin Farrell. Kevin grew up in St. Claire’s parish and attended St. Rita’s. Go Mustangs! Houli is an old friend of Kevin’s younger brother Malachy and he chats about his family with focus on his Dad and brother Sean. When asked why he decided to join Law Enforcement, Kevin jokes that he “got in the wrong line at the Ward office”. While growing up in the 8th district, the opportunity arose to work at the Department of Corrections for Cook County and that was the beginning of his long career. Kevin spent over 3 years working as a Correctional Officer at the jail. “I saw more than I ever wanted to see in my life..”  Kevin currently works at the Intel Center but he has plenty of stories to share from his extensive career including executing a search warrant with an officer who forgot his gun and another funny story about another search warrant for a Trailer Park. He explains that 8-10 officers would execute up to 5 search warrants a week. Kevin worked in Narcotics before being promoted to Sergeant, a title he has held for over 19 years. He and Houli delve into the downsides of the job, especially when it comes to public opinion on Law Enforcement as well as the lack of support from the politicians and media. “We used to have more support!” Kevin is an Executive member on the Board of Illinois FOP as well as the FOP President of Lodge 4 and he discusses Bill #3653. Houli wonders what it’s like to get tased and this leads to a hilarious story about a guy who they pulled from a car. Kevin discusses some of the charity work he and his fellow Lodge 4 members do including providing kids with clothes and toys for Christmas. The importance of body cams, their mutual friend John Cantanzara and the “Defund the Police” movement are just some of the many subjects these two cover during this incredibly insightful interview. Houli then brings us up to date on some local events as well as the recent obituaries. We take a well-needed trip to our favorite “Houli-Town” to end another great show!