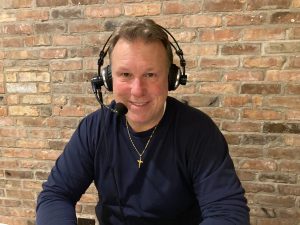 Fox’s Pizza, Guinness, the Cork and Kerry Irish Pub and Flood Brothers Disposal present the Hibernian Radio Hour as we continue on our First Responders Tour at The Cork and Kerry Pub on Western Avenue and this week we welcome Lyons Police Chief Tom Herion. Tom grew up in St. Peter Canisius until he was 18 years old and then moved to St. Juliana. He attended Weber High School and has been in Law Enforcement for over 35 years, working in Federal, State and local departments. He and Houli have become good friends and share stories from some of their recent social outings! Tom is currently the Lyons Chief of Police so it’s safe to say he has a serious reputation in Chicago. He speaks fondly about his friend and fellow Lyons Police Chief, Tom “Tucker” Sheahan. “He’s a character!” Tom chats about his family with focus on his famous father who worked as a Sergeant in Organized Crime. “He’s the reason I became the police!”. Tom was hired in Bensenville in the late ’80s and talks about how he was the only person out of 700 people who was hired at orientation. He held many titles including Sergeant and Undercover Narcotics Agent before moving up the ranks to Chief of Police. When asked about working  in Lyons, he says “It’s a good place to be the police!”. He also credits Mayor Christopher Getty with Lyons’ continuous success. “He’s a tireless, professional guy!” He delves into some work stories including the horror they found when responding to a double missing person’s report at a residence already known to the police for hoarding. He shares the unbelievable story about when they confronted the residents inside – it’s a story you have to hear to believe! When asked why these kinds of cases take so long to solve, Tom explains “You want to make sure you do it right because you’ll be judged on your actions.” He shares some other stories including some crazy traffic stops and incredibly dangerous car chases where shots were fired! This local legend is an avid piper and 20 year member of The Pipes and Drums of The Emerald Society. He explains the reasons why he joined The Chicago Garda Pipes and Drums and he ends another wonderful interview by sharing a heart-warming story about playing at Terry Murphy’s funeral, a homeless veteran in Elgin. Hats off to you, Tom! Houli then brings us up to date on some upcoming local events including the big film weekend from Jan 21-24 where we will be screening “Endless Sunshine On A cloudy Day” at multiple locations with special guests John Connors and Tiernan Williams. Be sure to get out and join us for the craic! Then it’s over to obituaries followed by a quick trip to “Houli-Town”.