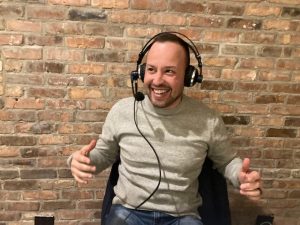 Fox’s Pizza, Guinness, the Cork and Kerry Irish Pub and Flood Brothers Disposal present the Hibernian Radio Hour as we continue on our First Responders Tour at The Cork and Kerry Pub on Western Avenue and this week we welcome Rob Cruz. Rob grew up in Joliet and attended Providence Catholic High School where he played as Quarterback. He chats to Houli about his family with focus on his wife and 11 year old daughter who created some art pieces for his campaign. Rob is running for Congress and is looking forward to the Primary on June 28th. He chats about raising money for his candidacy and how he’s nervous but fired up and ready to work! “My special interest groups are the parents!” He also shares the story about making the decision to run for Congress during a 10 year anniversary trip with his wife. Rob joined the Oak Lawn school board and had two main goals – To lower property taxes or at least keep them the same and to make sure it’s safe for the kids to go back to school. He discusses the decline in mental health especially among our children during the pandemic. The School Board filed an emergency meeting where Rob was given a ‘service of notice’ and he delves into how they essentially turned on him and the lack of correct procedures during that time. “The progressives are very aggressive..” Rob explains why he sued Governor Pritzker and the details behind that lawsuit. He was fighting to “allow local schools to make their own decisions on covid protocols.” These two delve into their thoughts on Pritzker’s political actions or lack thereof and they chat about how Pritzker dangles deals in front of others that affect people who are speaking up, like Rob! He also points out the importance of integrating new school subjects and the lack of school subjects for students who may be interested in Trade School. “Let’s put education back on the street”. ‘Defund the Police’  movement and the changes in political parties over the last few years are some of the other topics these two cover. Rob was diagnosed with Leukemia in 2011 and discusses how his faith got him through his worst days. We’re honored to have him join us on the show this week! Houli then brings us up to date on the latest obituaries and then it’s over to our favorite place called “Houli-Town” for some well-needed comic relief!