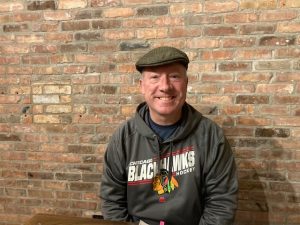 Fox’s Pizza, Guinness, the Cork and Kerry Irish Pub and Flood Brothers Disposal present the Hibernian Radio Hour as we continue on our First Responders Tour at The Cork and Kerry Pub on Western Avenue and this week we welcome our old pal and recently retired Detective Bill Donnelly. Bill is a West Beverly native and attended St. John Fisher followed by Marist High School. He received a Masters in Criminal Justice from Lewis University and retired just two weeks ago after 32 years in Law Enforcement. He worked at the Burbank Police Department from ’90-’94 and Chicago Police Department from ’94 up until his recent retirement on January 15th, 2022. Bill begins by chatting about his wife, Beth and two sons, Gavin and Quinn. He remembers his father who was a legendary Homicide Detective and how he inspired Bill to follow the same career path. Bill was just 25 when he joined the Force and chats about beginning his career in Burbank where “there was always something to do”. He mentions some of the best nicknames he heard on the street including “Lazy”, “Chocolate” and “Tweety”. He has plenty of stories to tell including a story about a lady who was mugged while walking her baby in a stroller and how an onlooker was shot twice trying to help her. “They’re not good at what they do, they’re just bold”. He shares a funny story from the night before Thanksgiving in 2020 where a carjacking was reported in a residential area with a car that had GPS. Bill describes how surveillance helped catch that carjacker due to him unknowingly wiping his DNA on the steering wheel while trying to wipe off his prints. He discusses the ins and outs of the carjacking crime that has risen in and around the city and he shares another story about how he ended up accidentally handcuffing his partner to a suspect. Houli and Bill cover many topics including how to deal with violent suspects and how criminals scam the elderly. He describes in detail what these particular cons entail and what they say to fool people. This leads to Houli sharing his own story in dealing with some scammers of his own. Bill has one final story to tell about when he recognized a suspect’s name on TV and how that led to a huge counterfeit sting that was written about in he book, “The Art of Making Money”. He shares his take on the current social unrest and thanks Houli for giving the police a voice during this uncertain time. Bill helps find guests for this show and we’re very grateful for all his help and kindness! Houli brings us up to date on some upcoming local events followed by the most recent obituaries. Houli ends another successful/wonderfully interesting show with a quick joke!