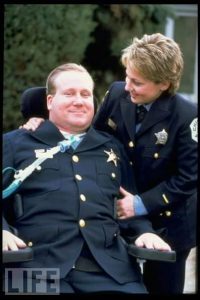 Jim Mullen and his wife Athena

Fox’s Pizza, Guinness, the Cork and Kerry Irish Pub and Flood Brothers Disposal present the Hibernian Radio Hour as we continue on our First Responders Tour at The Cork and Kerry Pub on Western Avenue and this week we welcome the wonderful Jim Mullen aka: ‘The Comeback Cop’. Jim grew up in Hamlin Park but moved to Forest Glen when he was 8 years old. He attended Loyola Academy High School followed by Northeastern Illinois University. He worked as a cop for almost 8 years before he was shot on duty and left as a quadriplegic. This horrific incident happened 25 years ago and Jim says he still misses the work. He chats to Houli about his wife Athena and daughter Margaret who is doing a Masters in Finance. He discusses his Irish roots – his father’s family were from Mayo and his mother Audrey, was part-Irish. Audrey was a self-taught chef who hosted weekend dinner parties and made her own applesauce. “She was a phenomenal cook!” He tells the story about how he was inspired to set up the applesauce business after he met a fellow sauce maker. Houli describes Mullen’s Applesauce as “apple pie without the crust!”. It’s fair to say the product is enjoyed as he is now starting to work with some larger stores to distribute it on a much larger scale. He also chats about his sister who he says cooks up some of their mother’s best recipes. When asked about the ‘Defund The Police’ movement, Jim says “I feel very sorry for my brothers and sisters out there..” He tells Houli about how his dear friend, Bill Nimrod, has helped take care of him for the last 25 years and he expresses his gratitude to all his friends, family and health staff who have helped him during that time. Jim ends his insightful interview with some words of advice to his fellow officers – “Keep up the good work and stay safe!”

We then take a look at an old interview with the newly crowned Queen of Chicago’s St. Patrick’s Day Parade, CPD Officer Kelley Leyden. Kelley grew up in St. Michael’s Parish in Orland Park and attended Carl Sandburg High School. She studied to become an X-ray technician at Moraine Valley Community College and has been with CPD for 4 years now. She has her fair share of tales from work that she shares with our listeners. Kelley also chats to Houli about the reason she left the medical field to join the Force, her trip to Ireland and her duties as a member of the Queen’s Court. She delves into her Irish heritage and discusses how working for the Law is a family thing. Kelley is a charming lady and we look forward to having her back on the show soon! Houli then brings us up to date on some upcoming local events that you don’t want to miss followed by the recent obituaries and a final joke to end another great show this week!