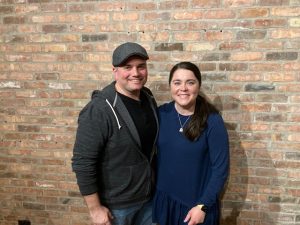 Fox’s Pizza, Guinness, the Cork and Kerry Irish Pub and Flood Brothers Disposal present the Hibernian Radio Hour as we continue on our First Responders Tour at The Cork and Kerry Pub on Western Avenue and this week we welcome two of our good friends, Pat and Kerry Doran. This lovely married couple are both First Responders – Pat works as a firefighter and Kerry works as a Pediatric Nurse Practitioner at Edwards Hospital in Naperville. She was crowned the 2010 Chicago St. Patrick’s Day Parade Queen and starred in Houli’s movie “Her Majesty ‘da Queen” that same year. Kerry attended Carl Sandberg High School followed by UIC College of Nursing where she received a Masters Degree. She attributes her career choice to her mom and aunts who were all nurses. “Someone’s got to take care of people”. She discusses her time working as a neonatal ICU nurse before moving to the doctor’s office where she currently works. Kerry shares some of the exciting experiences she had during her year as Queen as well as the more embarrassing stories including the time she got mustard on her sash. She emphasizes the strong sisterhood within the Queen’s Court and she and Houli chat about the fun they all had during the Queen contests. Pat grew up in Our Lady of Victory and attended Notre Dame High School where he played football. His dad, Jim, worked in Forensics and was a founding member of The Emerald Society. He shares the story about his father working the case of creepy 80’s murderer, Larry Eyler. Pat began with the Cook County Sheriff’s Department and worked in the jail for 5 years. He took the test to become a firefighter in 2006 and got the call for the job 10 years later. He and Kerry share the story of when they both found out and how relieved Kerry was as she would worry about him on cop duty. Pat has been playing with The Shannon Rovers for 24 years, joining them at the early age of 14. He chats about playing all over the city, the people they meet along the way and the close camaraderie among the band. There are around 60 guys in the band altogether and they have played at some very big events including Maureen O’Hara’s funeral. Pat discusses the reaction he got from his former colleagues when he was called to work at the Fire Dept, especially his teammates from the CPD football team. He tells the story about his time working in the jail where the guy responsible for the Brown’s Chicken Massacre in Palatine was being held. Pat and Kerry met during the Queen contest and they chat about raising three young kids as well as being pregnant during a pandemic. The Larkin & Moran Brothers are their favorite band and Pat tells the story about proposing to her at their gig. We are honored to have such an inspiring First Responder couple on the show! Houli then brings us up to date on some upcoming events including “Houli Fest” on March 12th at the Beverly Arts Center. Then it’s over to obituaries followed by a final trip to our favorite place called “Houli-Town”.