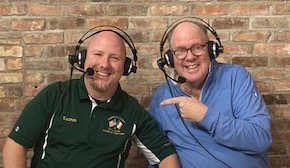 Fox’s Pizza, Guinness, the Cork and Kerry Irish Pub and Flood Brothers Disposal present the Hibernian Radio Hour as we continue on our First Responders Tour at The Cork and Kerry Pub on Western Avenue and this week we welcome Emerald Society President Daniel Kearns to the show. Daniel is the 11th of 11 children and all his family attended St. Andrew’s and St. Benedict’s. He has worked in Law Enforcement for 24 years and chats about how his family’s blood runs blue with two of his brothers and their cousin having also worked in Law Enforcement. He also discusses his family’s claim to fame, being cousins with former Sheriff and CPD Superintendent, Jim O’Grady. He began working in a jail and shed some light on what that job entails. Daniel tells the story of how his grandfather, a Captain with the IRA, met his grandmother who was a member of the IRA women’s brigade. Both hailed from County Mayo and they met again years later when his grandfather recognized the voice of the lady who had nursed him back to health in Ireland. “It’s the ultimate Irish love story”. Daniel still lives in the house they first bought many years ago. He is a motorcycle enthusiast who has a dedicated entourage supporting him at the Cork & Kerry during the interview! He has numerous stories from his time on the job to share including dealing with unruly convicts on a plane and their not-so-safe drive back to the city as well as another story about working with the Major Case Assistance Team in investigating a drug deal gone wrong. “Whenever they needed something done, they called our team!” Mike Sheahan was once Daniel’s boss and he and Houli chat about some of their other mutual friends on the Force. Daniel brings us up to date on some of the upcoming exciting festivities including the Meet & Greet with over 60 Garda from Kilkenny at the FOP Lodge on March 11th as well as the Emerald Society of Illinois St. Patrick’s Day Party on March 12th at Local 399. These two pals end an incredibly insightful interview with a discussion about the importance of the police in today’s world. “The bad guys are training to come at us”. Houli then brings us up to date on some upcoming events including our very own “Houli Fest” on March 12th. Then it’s over to obituaries followed by a quick stop at our favorite place known as “Houli-Town”.