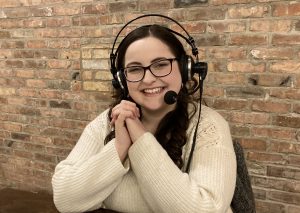 Fox’s Pizza, Guinness, the Cork and Kerry Irish Pub and Flood Brothers Disposal present the Hibernian Radio Hour at The Cork and Kerry Pub on Western Avenue for a very special “Houli Fest” show and this week we welcome Devin O’Malley. Devin works as the Marketing and Communications Strategist at the Beverly Arts Center as well as the Program Coordinator for the Hammond Arts & Performance Academy. She is a proud Southsider from St. Christinas’s parish who currently lives in Hammond. Devin attended Mother McAuley and received her Bachelor’s Degree in Communications from St. Xavier’s University. She chats about her parents and 2 older brothers and delves into discussing her new line of work. St. Patrick’s Day Parade takes place Sunday March 13 and there are plenty of festivities taking place around Chicago. The Beverly Arts Center will host a pre-parade party starting at 8am featuring a puppet show and other family entertainment Family bundle pricing is $50 for 4 people with a guaranteed parking spot! The first ever “Houli Fest” will be kicking off the St. Patrick Day celebrations on Saturday 12th at 4pm with a screening of “Goin’ East On Ashland” followed by “Our Irish Cousins” and the most recent documentary about the Chicago Flag, “In Search Of Weeping Jim”. As Devin says, “There will be good movies and a full bar!”. The Emerald Society will also be celebrating St. Patrick’s Day with a party at Local 399 on March 12th – you won’t want to miss any of these lively celebrations! Devin and Houli then chat about the beautiful Emerald Isle and she mentions her father’s family who hailed from County Mayo. The Beverly Arts Center has plenty of shows coming up throughout April including some exciting Irish musical entertainment as well as multiple rock tribute shows. They will also host the “Next To Normal” Play from March 18-20, tickets are $20. We end another great interview this week by discussing the excitement surrounding this year’s St. Patrick’s Day weekend especially since the previous parades were cancelled due to the pandemic. We’re delighted to have Devin join us and be sure to get out and support the Beverly Arts Center! Don’t forget – “Our Irish Pub”  will be airing on Thursday, March 17th at 11pm on WTTW Channel 11. Houli is then joined by his son Paddy and they take a look back at how they got Hibernian Media to where it is now -it’s been a long road! Then Houli brings us up to date on the most recent obituaries followed by one final joke to end another wonderful show this week. We hope to see you all this weekend at the celebrations!