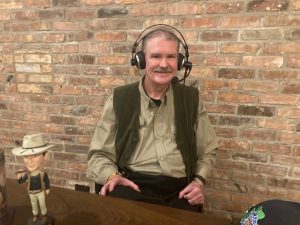 Fox’s Pizza, Guinness, the Cork and Kerry Irish Pub and Flood Brothers Disposal present the Hibernian Radio Hour as we continue on our First Responders Tour at The Cork and Kerry Pub on Western Avenue and this week we welcome back a very special friend of the show, the one and only James “Duke” Lynch AKA: Alamo!  Alamo is a U.S Marine Corps Vietnam Veteran and a retired 39 year veteran of the Chicago Police Department. He is a South Shore native who attended St. Philip Neri School and Lyons Township High School. This guy is a man of valor who was awarded the Bronze Star after he lost both his knees in the war and still returned to combat after his 3 month recovery. It’s no secret that Alamo is a devoted fan of John Wayne, admiring him so much growing up that he had to repeat the 5th grade because he skipped school for a month to go see “The Alamo” 60 times in the theater.. He even took time off work to attend John Wayne’s funeral! Alamo focuses on his CPD career and the current anti-cop culture. He was working at the Columbus statue during the rioting and tells the story of being hit in the head by a projectile! He grew up in a police family – his father and grandfather were cops and when Houli asks why he joined CPD, he replies, “I wanted to help people!”.  Alamo has his fair share of stories from his time on duty including saving a nurse from a sexual assault, being shot in the stomach during a shoot out and delivering two babies, one of whom was named Duke! There has been a serious rise in suicide among police officers and he talks about the differences in policing now compared to when he was on the Force. “It’s a woke police force now!”. He shares some of his favorite family memories including watching “Shock Theater” in his Grandma’s house. This legend has been awarded more awards than we can count including the Friend Indeed Award for carrying two children out of a burning building as well as housing his neighbors after another fire. These two old pals discuss the crazy year that was 2020 and things get political with a discussion surrounding the “Defund The Police” movement. Alamo ends another wonderful interview with some memories of meeting the real Alamo. There’s never a dull moment when Alamo is around! Houli updates us on some local upcoming events in the Irish community followed by the recent obituaries. Then it’s over to “Houli-Town” to end this week on a comical note!