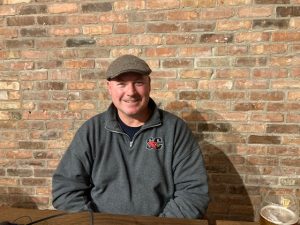 Fox’s Pizza, Guinness, the Cork and Kerry Irish Pub and Flood Brothers Disposal present the Hibernian Radio Hour as we continue on our First Responders Tour at The Cork and Kerry Pub on Western Avenue and this week we welcome CFD Engineer John Reaney. John currently lives in Mount Greenwood but grew up in Our Lady of the Ridge parish. He attended Marist High School and worked as a bartender at Corrigan’s on 111th St. and at the Ironworkers before joining Chicago Fire Department. John delves into his Irish heritage and his love for Ireland. His Dad and maternal grandparents were from Mayo and he tells the story about when his parents went to Ireland, his mother was scared she’d feel homesick but ended up not wanting to leave Ireland at the end of the trip. She was the first female President of The Mayo Association at Gaelic Park and his father was one of the Founding members of St. Brendan’s Gaelic Football Club where both John and his brother Pat played. He also chats to Houli about his wonderful wife, Colleen and his sons, Jimmy & Marty. John joined Chicago Fire Department in 2009 and has been stationed in many places including Hyde Park and Back of the Yards. He explains how he went from wanting to become a pro athlete to being convinced by his pals to take the CFD test in 2006. At that time he was working as a Project Manager for a Contractor but he mentions that the CFD position was more appealing because of the great schedule, especially being a family man. He currently works in the 4th District as a “Reliever” and explains briefly that his job is to “Drive them to the location and make sure they have water in the hose!” He and Houli remember the late, great Herbie Johnson and John goes on to share many stories from his time on the job so far including dealing with a snarky but funny suspect as well as responding to a call with our dear friend Maggie Murphy where the patient soiled themselves! “There’s great camaraderie in the Fire Department”. John is also Communications Director for Gaelic Fire Brigade which was founded in ’78. These two discuss the “Brotherhood of the Barrel” strike in 1980 and John mentions some of the perks of becoming a member of the Gaelic Fire Brigade including taking part in charity work as well as an annual family picnic. It’s evident that he loves his job and we’re honored to have another proud Irish First Responder on the show. What a great interview with a lively audience! Houli then brings us up to date on some of the upcoming local events followed by the recent obituaries. Then it’s over to “Houli-Town” for one final laugh to end an incredibly insightful show this week.