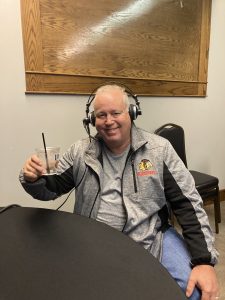 Fox’s Pizza, Guinness, the Cork and Kerry Irish Pub and Flood Brothers Disposal present the Hibernian Radio Hour as we continue on our First Responders Tour at The Cork and Kerry Pub on Western Avenue and this week we welcome CPD Lieutenant Godfrey Thomas Cronin, aka: ‘Sea Bass’. Godfrey is a native southsider having grown up in Markham and attended Brenham Community High School. He now lives in Mount Greenwood and has been working with CPD for 30 years. This is his last week on the job and we’re honored to have him join us on Hibernian Radio on his final day. Godfrey takes Houli through what he got up to on his last day and how he plans on celebrating his retirement by remembering his fallen comrades in a very beautiful and personal way. He mentions many of the colleagues who have helped him over the years, especially in preparation for his upcoming retirement. He chats about his unique name and how Godfrey is a family name that goes a long way back as well as explaining to Houli where he got the nickname “Sea Bass” from. This gent explains his connection to Paul Bauer as his former Tactical Lieutenant in the 18th district. John Knight was also a friend of Godfrey’s and he shares the fact that he keeps a replica of John’s star in his pocket at all times – a truly touching tribute. He then chats about the many titles he has had including Watch Commander, Commanding Officer and Tactical Lieutenant. He also mentions some of the toughest districts he has worked in including his 4 years stationed in Englewood.  He chats to Houli about working surveillance  in plain clothes and how his work relationship with Eddie May blossomed to a true friendship over the years. Godfrey then delves into the seriousness of the protests in 2020, the crazy looting that followed and the scary tactics rioters used to intimidate officers. “It was a planned attack on police!” When asked if he sees things getting any better, Godfrey replies “The institutional knowledge in the police department is leaving quickly…”. He continues to share some work stories from his extensive career including responding to a call about 300+ gang members gathered at North Avenue Beach aka: ‘Cronin’s Beach’, and the madness that ensued trying to disperse that crowd. “We learned some things…” Godfrey also explains the kind of person it takes to be a successful officer as well as sharing his experience working on the bike unit during Chicago’s most turbulent times. This legend’s reputation precedes him and he ends his incredibly insightful interview with some advice to new recruits coming up through the ranks – “The curve is going to shift back towards us!”. Houli then brings us up to date on some upcoming local events including this year’s trip to Ireland in the Fall and that’s followed by the recent obituaries. We take a musical break with Eimear Arkins’ rendition of “The Darling Girl From Clare” and finally we take a trip to “Houli-Town” to end another wonderful show.