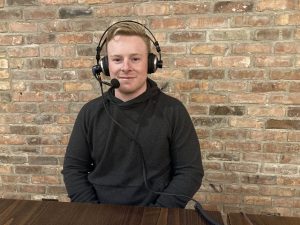 Fox’s Pizza, Guinness, the Cork and Kerry Irish Pub, Madden Funds and Flood Brothers Disposal present the Hibernian Radio Hour as we continue on our First Responders Tour at The Cork and Kerry Pub on Western Avenue and this week we welcome Jack Reilly to the show. Jack is a proud West Beverly native and graduate of St. John Fisher. He attended Marist High School and spent his college years at Saint Xavier University. Jack obtained a Bachelors of Nursing degree just this month and has been working as a Certified Nursing Assistant at Advocate Christ Children’s Hospital for 10 months. Jack has worked as a barback and bartender at the wonderful Cork & Kerry for the past 4 years and is currently pursuing a position as a Registered Pediatric Nurse at just 23 years old! His grandparents were from Dublin and he has a huge crowd supporting him at the show. Jack has been working at Christ Children’s Hospital for about a year and he mentions that working with sick children “has its challenges”. He has two siblings and chats to Houli about how his mother’s work as a Pediatric Nurse influenced him – She even taught him! Jack has hopes of becoming a Nurse Practitioner down the road but says he doesn’t plan on leaving The Cork & Kerry anytime soon! He shares many stories from his career so far including a story about a baby having a seizure and the mother who fainted soon after. He also talks about some of the patients he sees including children who accidentally eat edibles, batteries and marbles. He also shares a heart-warming story about a cancer patient who wanted M&M’s at 3am. This gentleman is the perfect fit for the job! Jack then delves into the stigma surrounding male nurses and the increase in men joining the profession. He also discusses working in conjunction with DCFS as well as the current baby formula shortage and its effect on the NICU wards. Jack shares the difficulties in caring for young cancer patients as well as trying to deal with emotional parents and discusses the current shortage of nurses in the country. He also has some stories to share from his time as a bartender and he shares his hopes for the future with Houli before ending another insightful interview. Houli brings us up to date on some local events including Ribfest on Monday, June 13th at the FOP Lodge – 1412 W. Washington – $20 all you can eat! Then it’s over to obituaries followed by one last visit to “Houli-Town”.