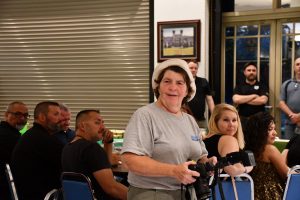 Fox’s Pizza, Guinness, the Cork and Kerry Irish Pub, Madden Funds and Flood Brothers Disposal present the Hibernian Radio Hour as we continue on our First Responders Tour and this week we have a special show coming to you from The Emerald Society Ribfest & Awards Night at FOP Lodge #7 with special guests Deborah Trainor and Tracy Cavanaugh. Deborah is a retired CPD Photographer and she grew up in Gage Park. She attended Gage Park and Curie High School simultaneously so she could take photography classes. She also worked as a photographer with the United States Marine Corps while they were stationed in Iraq for 4 years. She has photographed many things from ID Cards to important Dignitaries who visited the base. When she returned to Chicago, she began working as a photographer for the police and she takes us through that meticulous interview process. She remembers one of the best days of her working life when the Sox won the World Series in ’05 and she got to hold the trophy multiple times! “I love the police, it’s the greatest family in the whole world!”. She discusses the seriousness and sadness surrounding our fallen officers and how honored she is to photograph their funeral services. Deborah chats about her family who hail from Mayo and shares some memories from the wonderful trip she took to the Emerald Isle with the police. “I truly love my job!”.  Her sister, Mary, is still working with CPD and her nephew works with Gary police so it’s true to say her family’s blood runs blue! She was recently awarded the Thomas Cody Award at Ribfest & Awards Night and we are honored to have her on the show. We take a musical break with “Don’t Let The Truth In The Way Of A Good Story” by Gaelic Storm. 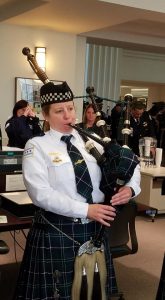 Our second guest this week is Tracy Cavanaugh who is a Cook County Sheriff Deputy Sergeant. Tracy grew up in Beverly and attended Mother McAuley. She is the Emerald Society Treasurer and a longtime member of the Emerald Society as well as a bagpiper with the Emerald Society’s Pipes & Drums. Tracy joined the Cook County Sheriff’s Department in ’03. Her father, Jim, was a cop and a founding member of the Emerald Society. She currently works at the juvenile courthouse and describes her work as “interesting”. She first started working at domestic violence court and evictions before moving to the juvenile court. “A lot of kids are the ones doing the crimes!”. Tracy delves into some of her duties including the correct protocol when responding to an evictions call and shares some stories from that time including a woman who was holding a butcher knife when they arrived. Tracy is a true lady and we’re delighted to chat with her this week! Houli brings us up to date on some upcoming Irish events including our upcoming trip to Ireland from October 19-27 with special guest Eimear Arkins – call 1-800-664-7474 to book your spot. then it’s over to “Houli-Town” for some well-needed comic relief to end another great show!