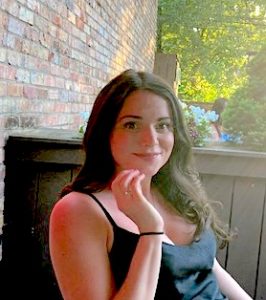 Fox’s Pizza, Guinness, the Cork and Kerry Irish Pub, Madden Funds and Flood Brothers Disposal present the Hibernian Radio Hour as we continue on our First Responders Tour at The Cork and Kerry Pub on Western Avenue and this week we welcome very special musical guest Michele McGuire. Michele was a regular guest on The Skinny & Houli Show and we’re thrilled to have her join us this week, like old times. She grew up in St. Mary Star of the Sea parish and attended Queen of Martyrs and McAuley followed by the University of Iowa. She began performing and playing the guitar in 8th grade. Michele chats about her sisters and her parents, Carmel and John. Her Mom is originally from County Mayo which leads to Michele discussing her recent show from March 2022 called “Land of Ire” which tells the story of the Chicago Irish. Her interest in Irish history and the relationship between Chicago and the Irish community was a big reason for the creation of the show. She describes her music style as ‘folksy’ which leads to a musical break with one of her newest songs, “Prayer Poem”. That’s followed by “Last Ditch Effort” and a special tribute song for all our Chicago Southsider listeners called “Going South Either Way”. Michele discusses the meanings behind her songs and chats about her writing process. She is recording a new album with the hopes to release it before Christmas. You can catch Michele every third Friday of the month at Fitzgerald’s during playing tunes so be sure to drop by! She will be opening for singer-songwriter Joe Pug next month. Michele chats about the band she plays with and how she got into music. She and Houlli share some industry stories and some of their best memories from over the years. These two have a lot in common so there’s plenty of banter! We go to another musical break with some of Michele’s wonderful songs from her show, “Land of Ire”  including “Get Out” which tells the story about the negative reception that faced the Irish people when they first arrived here. This is followed by a beautiful tune called “City on the Lake” and a sort-of love song, “You Ain’t Right But I’ve Got Nothing Left”.  Michele’s new album, her pregnancy and upcoming gigs are some of the other topics discussed this week. We’re honored to have such talent on the show! Then Houli brings us up to date on some upcoming local events including the kick-off Movie Hooley fundraiser screening of “The Great McGinty” on July 24th at Oak Park’s Lake Theatre as well as Houli’s upcoming trip to Ireland in October with special guests Eimear Arkins and the Chicago Garda Pipe Band. We go to the recent obituaries followed by a quick visit to our favorite place, “Houli-Town”!