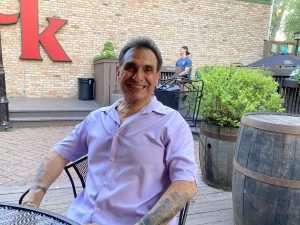 Fox’s Pizza, Guinness, the Cork and Kerry Irish Pub, Madden Funds and Flood Brothers Disposal present the Hibernian Radio Hour as we continue on our First Responders Tour at The Cork and Kerry Pub on Western Avenue and this week we welcome Bruce Quintos AKA, Rico Quinn. He was born on the west side in Precious blood parish and graduated from St. Rita’s High School in ’67. His mother was from Newcastle in County Down and his Dad was from the Philippines. He chats in depth about when his parents met and how his father made them recite the Pledge of Allegiance every morning. Bruce started a band called “The Shy Lads” with some of his fellow St. Rita guys. 3 of whom joined the Police Department. He joined the Forest Preserve Police in ’80 followed by the North Eastern Metropolitan Enforcement Group where he had interactions with plenty of biker gangs and patrons in city bars.. “That was an experience!”. He tells Houli about how he worked his way up the ranks to become Commander of Field Operations. Bruce also chats about how his music career ran parallel to his career. He joined the Emerald Society as a piper and was soon promoted to Pipe Major which he worked as for almost 20 years. He started the Chicago Garda Pipe Band 4 years ago with Tom Herion, Danny Young and Donny McGrath and shares the story of how it was formed because of a Vietnam veteran who passed away with no family to give him a proper send-off. They played Carnegie Hall in ’03! He and Houli discuss how Jane Byrne was a pivotal force in establishing The Emerald Society Pipes And Drums and he tells the story about meeting Gerry Adams  He also talks about his 57 Chevy show car, Louise, that regularly wins ‘Best In Show’. These two pals end this great interview with a discussion on the rise of suicide among cops and how the Mayor is not helping the crisis. Houli brings us up to date on some upcoming local events including the kick-off Movie Hooley fundraiser screening of “The Great McGinty” July 24th at Oak Park’s Lake Theatre as well as Houli’s upcoming trip to Ireland in October with special guests Eimear Arkins. Then it’s over to obituaries followed by a quick trip to “Houli-Town” for one final joke to end this week’s great show.