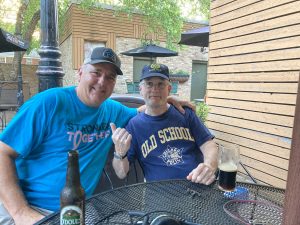 Fox’s Pizza, Guinness, the Cork and Kerry Irish Pub, Madden Funds and Flood Brothers Disposal present the Hibernian Radio Hour as we continue on our First Responders Tour at The Cork and Kerry Pub on Western Avenue and this week we welcome two very special guests, Cornelius “Neil” Maas and Jim Smith. Neil is a retired Chicago Homicide Detective and Jim is a retired US Marshall of 27 years who is also married to Houli’s niece. In his retirement, Neil spent 7 years working as a Court Security Officer at the Federal Building but is currently still recovering from shoulder surgery caused by a black ice injury. When asked if he misses work he replies by saying he misses the guys but doesn’t miss the work because of the way the CPD is headed today.. Houli lightens the mood by sharing the story about the first time he met Neil and Neil recalls the story of the bombing he investigated that had him travelling him all across the States. Jim is very involved with the southside St. Patrick’s Day Parade and it’s famous return several years ago. “It’s the best parade in the city of Chicago!”. He discusses meeting Neil for the first time over 10 years ago and tells Houli about how Neil got the job at the Federal Building with him. Jim also shares a story about Neil getting a flat tire on the golf cart during the parade and abandoning it on 103rd St. These two are a hoot together! These three pals discuss the need to lock up the bad guys instead of letting them go free. “We need to make a commitment to safety in our neighborhoods” – Jim.  Kim Foxx’s approach to criminals and the changing of laws for prosecuting accomplices is a hot topic between these three  and Jim makes a solid argument for more ‘Concealed Carry’ as we have lost 1700 officers from the Force already, if not more. The guys talk about how we need political leaders to step up and say “Enough is enough!”. They also discuss the fact that teenagers are the ones committing the crimes now and we need to figure out why our kids have” guns instead of basketballs.” The ongoing problems downtown and how it affects our city’s economic engine is a subject Jim is passionate about and he reiterates the importance of common sense among our officers as well the importance of our citizens voting for people who have public safety and economic development as their number one priority. Jim feels positive about the possible changes that we can make, “but you gotta have the will to change it!”. These 3 friends chat about the current state of the CPD and how those who are currently joining the Force are “people who put service above self”. The politicians, the Mayor and media make the situation worse and Jim ends their incredibly insightful interview with some advice to our listeners, “It’s important that we support our police!”. Houli then brings us up to date on some upcoming events including The Emerald Society’s Family BBQ on Sat. September 17th at the FOP Lodge on Washington St with live music and whiskey tasting. They will also have their Annual Dinner Dance on Sat. October 1st at Gaelic Park. Be sure you get out and support our friends at The Emerald Society! Then it’s over to obituaries followed by a quick trip to “Houli-Town” for some comedy to end this week’s insightful show.