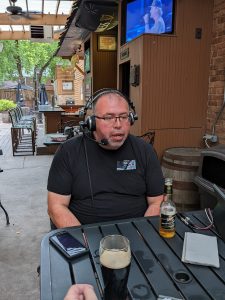 Fox’s Pizza, Guinness, the Cork and Kerry Irish Pub, Madden Funds and Flood Brothers Disposal present the Hibernian Radio Hour as we continue on our First Responders Tour at The Cork and Kerry Pub on Western Avenue and this week we welcome another one of our honorary Irishman, Roberto ‘Junior’ Guerra. Junior spent 27 years with the Burbank Police Department before retiring last summer. He was working at a factory and studying ‘Criminal Justice’ when he took the test and joined Cook County Jail in ’93. “It felt like a Mount Carmel Alumni Reunion in there with all the guards!”. He grew up in South Chicago and currently lives in his childhood home there. He explains how different that neighborhood is today compared to when he was a kid, mostly due to the heavy gang activity back then. Junior credits his experiences growing up and witnessing the wrong-doing to why he joined the Force. He attended Mount Carmel where he played football. “It’s a brotherhood, it was a great camaraderie.” He chats to Houli about how playing football helped keep him out of trouble and he recounts the story of how he was recruited for Mount Carmel football team. Junior mentions the success of their Fight Nights and the generous donations they receive. “Mount Carmel makes boys into men!”. He was also President of The Father’s Club during his sons’ education there. This leads to a conversation about his family with focus on his son Andrew who plays rugby for the USA National team, his son Anthony and his daughter, Anna. These two cover the serious topic of racism against Mexicans and their culture. The similarities between the Irish and Mexican families in Chicago are also a hot topic. “I really love the Irish culture, it’s very like the Mexican culture. – It’s about family, hard working people and faith”. It’s clear that he has a strong respect for the Irish and he tells Houli about why he hired a bagpiper for his father’s funeral. Junior currently works as the Director of Operations at McCarthy Byrnes Security Solutions and some of his duties there include active shooter training as well as working as security for celebrities like Sophia Bush and Sam Smith. He tells the story of Sam Smith’s generosity at Lollapalooza when he gave Junior a gift from backstage for his daughter. He shares many stories from his experienced career and some of those include Junior being t-boned by a distracted driver after just a month on the job. He tells another story about when he worked as an undercover cop for a Federal Narcotics organization as well responding to a call with a disappearing crime scene, disappearing injuries and a mysterious fire. He was even present at the exorcism! You have to hear it to believe it, folks.. He shares another supernatural but heartwarming story about his father’s spirit sending him a message from the beyond. We’ll be sure to have this legendary gent back as we only got to hear a fraction of the stories he has! Houli then pays homage to Sports Broadcaster Vin Scully and shares a story about meeting him at mass. We welcome our second guest this week, Paddy Houlihan. Not only does he co-host “The Houli’s Hooley” but he also works as Senior Producer for the Chicagoland Sports Hall of Fame. Their 25th Induction Ceremony will be on October 5th at Wintrust Arena. Some of the inductees this year include Brian Urlacher and Chris Chelios, For a more detailed history of the event and to purchase tickets, click here!