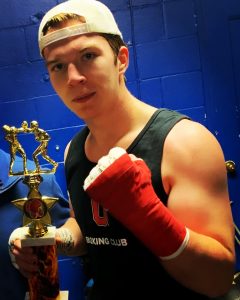 Fox’s Pizza, Guinness, the Cork and Kerry Irish Pub, Madden Funds and Flood Brothers Disposal present the Hibernian Radio Hour as we continue on our First Responders Tour at The Cork and Kerry Pub on Western Avenue and this week we welcome very special guest, Ryan Clancy who is the brother of recently fallen Police Officer Patsy Swank. Rest In Peace to this young, brave and wonderful lady. Ryan brings a huge supportive crowd with him this week full of Patsy’s family and friends. He is the son of CPD Lieutenant Tim Clancy and Ann Clancy who is a dispatcher for the OEMC. Since Patsy’s death, Ryan has been “advocating for our officers and shedding light on the mental health crisis our heroes are facing.”  He is doing everything in his power to raise awareness and garner support for our officers who put their lives on the line everyday.  He talks about how his sister lives on through her 5 year old son as well as all the lives she impacted over the years. Check out coverage of the story here. Ryan attended St. Rita’s and is currently studying Finance at Ohio State where he competes on the Ohio State Boxing Team. He begins by delving into the close relationship he and his sister had from a very young age and he shares the story about how she surprised him with her pregnancy announcement. Patsy graduated from Mother McAuley where she played on various sports teams and she was training at the Academy during her pregnancy. She spent 7 years working in the heart of Englewood and recently worked 22 consecutive 12-hour days. Ryan discusses how Mayor Lori Lightfoot is “feeding lies” to the media and he mentions the stigma involved with being the police. Our officers don’t even have time to seek help for their mental health with their crazy work schedules! We hear the heart-wrenching story of how Patsy’s family broke the tragic news to her young son and Ryan speaks about his hopes to turn Pro boxing in the coming years but for now, he is busy challenging the Mayor and we salute him for that! Ryan and Patsy’s family has 5 generations of police all the way back to their great-great grandfather so it’s safe to say this family’s blood runs blue! Ryan ends this important and insightful interview by promoting some useful resources for those suffering with their mental health including Blue H.E.L.P. and 988. This guy is ‘The Man’ and we wish him and his family the best on their journey to bring awareness to this incredibly serious subject . Houli then brings us up to date on some upcoming local events including our Annual Movie Hooley at Oak Park’s Lake Theatre, September 16-18 and at the Wilmette Theatre, September 23-25. Then it’s over to the obituaries followed by an interview with Houli’s son, Paddy. These two joke about when the time comes for Paddy to take over the show and discuss their recent shenanigans at the Chicago Cultural Alliance Dinner. The craic is mighty between this father and son duo! We make one final stop at “Houli-Town” before ending another great show this week.