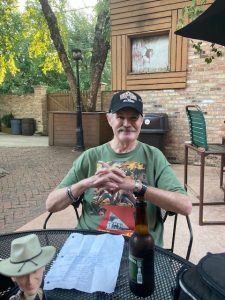 Fox’s Pizza, Guinness, the Cork and Kerry Irish Pub, Madden Funds and Flood Brothers Disposal present the Hibernian Radio Hour as we continue on our First Responders Tour at The Cork and Kerry Pub on Western Avenue and this week we welcome back a regular guest on the show,  James “Duke” Lynch AKA: Alamo! Alamo is a U.S Marine Corps Vietnam Veteran and a retired 39 year veteran of the Chicago Police Department. He is a South Shore native who attended St. Philip Neri School and Lyons Township High School. This guy is a man of valor who was awarded the Bronze Star after he lost both his knees in the war and still returned to combat after a 3 month long recovery. It’s no secret that Alamo is a devoted fan of John Wayne, admiring him so much that he had to repeat the 5th grade because he skipped school for a full month to go see “The Alamo” 60 times in the theater.. He even took time off work to attend John Wayne’s funeral! This legend has been awarded more awards than we can count including the Friend Indeed Award for carrying two children out of a burning building as well as housing his neighbors after another fire. Alamo has a list of things to discuss with him this week and begins by giving a shout-out to his old work partner and friend, Henry Pierzchalski, who is currently fighting cancer. Then he delves into the importance of our country’s history and why the removal of statues bother him. “If something offends you, don’t watch it or listen to it!”. Alamo feels strongly about what is taught in schools today and the direction in which the world is headed. “I can’t believe it anymore..” As always, he makes sure to bring attention to Chicago’s mental health crisis and the rising rate of suicide among our officers. Kim Foxx and the way in which she deals with criminals is always a hot topic between these two old pals and Alamo mentions that people aren’t joining the military because “they’re woke”.. The importance of the rosary. the rising gas prices and the protests surrounding abortion are just some of the many topics of conversation these two cover on another interesting and insightful show this week. This local legend will be on Houli’s trip to Ireland in October and he’s looking forward to visiting the Emerald Isle for the first time. This trip is going to be an absolute hoot so be sure to secure your place by calling Emma at 1-800-664-7474! Alamo is a real character and we’re always delighted to have him share his incredible stories on the show. Houli then brings us up to date on some upcoming events including the Annual Movie Hooley at Oak Park’s Lake Theatre, September 16-18 and at the Wilmette Theatre, September 23-25. Then it’s over to the latest obituaries followed by a musical break with “Celtic Symphony” by The Wolfe Tones. We end another great show this week with one final joke from Houli. Be sure to have a listen for another jam-packed hour on Hibernian Radio!