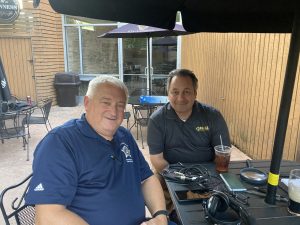 Fox’s Pizza, Guinness, the Cork and Kerry Irish Pub, Madden Funds and Flood Brothers Disposal present the Hibernian Radio Hour as we continue on our First Responders Tour at The Cork and Kerry Pub on Western Avenue and this week we welcome two very special Law Enforcement guests, Tim Perry and Gene Roy. Tim is the CEO of 10-41 Incorporated & Nationwide Chaplains , two companies that have been providing care and support to First Responders and their families since 2014. He spent 8 years with the US Air Force and his father who was a Paratrooper in the Korean War hailed from County Cork. Tim explains how he had the best of both his parents’ cultures, Irish and Native American. He delves into the serious discussion in regards to that fact that there has always been pressure on our officers since Day 1. “They are warriors, they’re paid to make great decisions under fire.” Tim and Gene discuss the crazy unrealistic hours that police are expected to work and how this is a contributing factor in the rise of suicides among our officers. They explain to Houli how 10-41 and Nationwide Chaplains came about and what exactly is involved in running both companies. They also discuss the kind of support they provide for those who are in need and why the word ‘resilience’ is so meaningful to them. Tim shares a story about going fishing with one of the officers he helped and he explains why hobbies are so important for Law Enforcement Officers in maintaining a healthy frame of mind.  He also talks about some of the horrifying scenes they’ve witnessed over the years and the power of his faith as he is an ordained minister. “I knew my faith had to be a part of the answer”. Gene is a retired 30 year CPD veteran who obtained many titles over his extensive career including District Commander of 9th District in Bridgeport. In his retirement, he teaches police about the emotional toll their careers can have on not only themselves but their families too. Gene dives into discussing the high number of police officers who are not particularly religious, the importance of practicing good habits and how our physical health is directly linked to our mental health. He compares the human mind to a computer and explains “that if you ask your mind to do too much, it goes haywire!” Tim shares his story about responding to an officer threatening suicide and how they provided him with the necessary support and treatment that was necessary to this specific case. The media stirring the pot, unique issues facing female officers and the joy in seeing an officer in need return to their former self are just some of the other topics these three cover on this week’s insightful show. Gene brings up the stigma surrounding mental health and he explains how it’s usually the typical cop who “absorbs the slings and arrows of outrageous consequence.” who are struggling the most as they feel they have to be tough for the people around them. Both Gene and Tim encourage everyone to talk to their partners and loved ones if they’re feeling down or if their work days are tough. One of the programs these two run is the ‘Resilience Spouse Program’ that helps officers’ partners learn how to communicate with their loved one and it also teaches them how to identify and lend support when it’s needed. Houli reiterates the fact that “asking for help doesn’t make you weak!” and the guys share some of the lines of support they have for anyone who is struggling out there so please get in touch if you need to talk via 10-41 Inc. or at nationwidechaplains.org  where you can press the ‘I Need Help Now’ button at the bottom of the frontpage and it will bring you directly to Tim’s personal phone. We salute these guys for the incredibly important work they continue to do and Houli hits the nail on the head when he says that these are  “two gents dedicated to the emotional stability and resilience of our Law Enforcement officers”. Houli brings us up to date on some upcoming events including our upcoming Annual Movie Hooley at Oak Park’s Lake Theatre, September 16-18 and at the Wilmette Theatre, September 23-25. Then we head over to the recent obituaries followed by a quick trip to our favorite place known as “Houli-Town” where we hear a brand new advice segment for the first time featuring our friend Dr. Ludwig Von Hershey-Squirt. Great craic to end another jam-packed show this week!