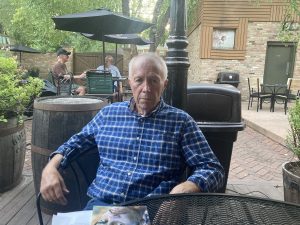 Fox’s Pizza, Guinness, the Cork and Kerry Irish Pub, Madden Funds and Flood Brothers Disposal present the Hibernian Radio Hour as we continue on our First Responders Tour at The Cork and Kerry Pub on Western Avenue and this week we welcome our pal, Brian McCann. Brian grew up in St. Laurence parish and later moved to Burnside in ’56. He attended a Hungarian school and was taught by Hungarian nuns. Brian is the second oldest of six kids and his brother Denny was the oldest. These two old pals begin by discussing Brian’s book, “Death In Chicago A Sanctuary City: The Sad Saga of the Untimely Death of Denny McGurn in 2011”. Denny was walking across the street in Logan Square in June of 2011 when a convicted felon and illegal immigrant who was drunk driving hit Denny and caused his violent death. Brian sheds light on the horrifically unfair circumstances surrounding the formerly convicted felon’s release from jail even though he had murdered Brian’s big brother. He explains the reasons behind why this felon was able to “bond out” for $25k and literally get away with murder! A Federal Warrant was issued for his arrest but he had already fled to Mexico, as expected. “Long story short, nothing happened!” Brian then became an activist, meeting with like-minded people around the country who were going through similar situations and they eventually created the ‘Advocates For Victims of Illegal Alien Crime’ organization. Several of these activists have testified before Congress regarding this ongoing issue and Brian talks about the support they received from former President Trump as well as how the media’s help has been crucial. Brian then delves into the extremely dangerous drug called Fentanyl and how it is brought to the USA via Mexico. “Fentanyl is fueling the gangs”. It’s a synthetic drug that is much more potent than heroin which leads to Houli and Brian discussing who is responsible for this nationwide epidemic. “60,000 people died last year alone from Fentanyl..” Brian then shares a story from 2015 when he appeared in front of the Senate and how Dick Durbin left right before Brian got up to speak. He also mentions the struggles they face trying to work with the current administration that Brian describes as “hostile”. Brian moves on to explain how Toni Preckwinkle allowed his brother’s murderer to walk free because of the fact that Chicago was named as a Sanctuary City. “Toni Preckwinkle believes in decarceration…” He and Houli discuss how the illegal immigrant issue is a worldwide problem including within Ireland and when Houli asks Brian if he sees a solution to this issue, Brian says, “The solution will ultimately rest in the Courts.” This gentleman has a wealth of information regarding these issues and explains that he’s still confident justice will be served. He ends his interview by discussing how Denny’s kids and extended family are doing now after 11 long years of fighting. “If we didn’t fight, it would be worse..” Continue to fight the fight, Brian! Houli then brings us up to date on some upcoming local events including The Emerald Society’s ‘Halfway to St. Patrick’s Day’ Party on September 17 from 1-6pm at FOP Lodge #7 with food, drink and good music! Don’t miss our upcoming Annual Movie Hooley at Oak Park’s Lake Theatre, September 16-18 and at the Wilmette Theatre, September 23-25. Then it’s over to the recent obituaries followed by a quick trip to our favorite place for some comic relief called “Houli-Town”.