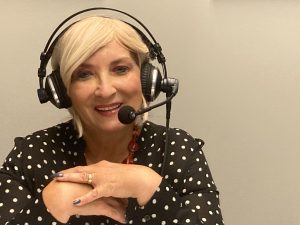 Fox’s Pizza, Guinness, the Cork and Kerry Irish Pub, Madden Funds and Flood Brothers Disposal present the Hibernian Radio Hour as we continue on our First Responders Tour at The Cork and Kerry Pub on Western Avenue and this week we welcome back retired CPD Commander Patricia ‘Patty’ Casey. Patty grew up in St. Ita’s parish and attended St. Gregory’s High School. She first began working on the west side and moved onto the Gang & Tactical Team where she took part in some exciting undercover work. She is a 32 year CPD veteran and worked as Commander of Youth Investigations.  “I had 32 good years.”. Patty oversaw 4 units in different locations including the Juvenile Intervention & Support Center which has since been disbanded. She is a true Police family Matriarch and it’s safe to say her family’s blood runs blue – her husband, daughter and two sons are all cops! She tells Houli about her youngest daughter with Special Needs and how she has taught Patty many skills that she can use to help others in Peer Support.  These two pals delve into many serious topics on this week’s show including the problem with Kim Foxx and Lori Lightfoot’s approach to our city’s criminals as well as the dangers associated with the lack of information available on local sex offenders. Patty shares some stories from her time as a Violent Crimes Detective including a 21 year old girl who took her own life on Father’s Day and having to break the news to the girl’s father that same day. The lies being told to the public by Chicago’s Police Superintendent David Brown is an important topic between these two friends and Patty mentions how important it is to have a good leader to walk alongside their people but how that’s not the case in Chicago. She describes what she would do differently if she was in his position and she reiterates the point that the police get mostly bad press because of a small number of bad guys on the Force. “The police don’t get a fair break…”. The difference in the Academy now compared to when Patty was training, the rising number of cop suicides over the past few years and the ‘Take Back Your Block’ initiative to support local Law Enforcement are just some of the other topics Houli and Patty discuss this week. This lady has a very impressive resume including working in the Detective Division and Supervisor before becoming Commander. She really is one of a kind and works as a Peer Support Member where she meets and helps CPD families who have a family member with Special Needs. Patty is an exceptional woman with a huge heart and we’re always happy to have her back with us on Hibernian Radio! Houli then brings us up to date on some upcoming local events including The Emerald Society’s ‘Halfway to St. Patrick’s Day’ Party on September 17 from 1-6pm at FOP Lodge #7 with food, drink and good music! Don’t miss our upcoming Annual Movie Hooley at Oak Park’s Lake Theatre, September 16-18 and at the Wilmette Theatre, September 23-25. Then it’s over to the recent obituaries followed by a well-needed trip to our favorite place called “Houli-Town”.