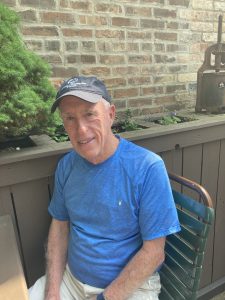 Fox’s Pizza, Guinness, the Cork and Kerry Irish Pub, Madden Funds and Flood Brothers Disposal present the Hibernian Radio Hour as we continue on our First Responders Tour at The Cork and Kerry Pub on Western Avenue and this week we welcome an old pal of the show, the infamous James ‘Skinny’ Sheahan. These two friends reminisce about their past radio show called “The Skinny and Houli Show” that aired for almost 10 years! When Skinny retired from McCormick Place he joined the Board of Special Olympics and started helping raise funds for the organization. He shares the story about finding the perfect space for their offices in the South Loop and his interesting interaction with the guy who owned the place. They are currently working on building a big Sports Center on the West side where they already have a park, gym and a rugby field. They are scheduled to complete it by November 1st and Skinny says they’re feeling great about it. “We’ve got the ball on the 1 yard line now..”. He shares some more stories from when he worked in Special Events for the city including the complaints he got from one downtown resident because of some elephants on “their beach” as well as noise complaints during the Air & Water Show.. This is funny stuff, folks! The Dalai Lama’s visit to Chicago and the hilarious car journey from the airport is another great story he shares and Skinny mentions some of the Special Olympics sports events coming up before delving into his family history. It’s safe to say that the Sheahan family’s blood runs blue – his father who hailed from Limerick was a Chicago policeman as well as four of his brothers! They chat about how it’s easy to blame the police these days for things that are out of their control but Skinny also chats about how difficult it can be working in government. “Being an elected official today is really difficult. Everything has changed with social media.” These two longtime friends share memories from their many trips to Ireland together including ‘the pillow incident’. Skinny has raced in 49 marathons but has since hung up his racing shoes. He takes part in the annual Polar Plunge to raise money for Special Olympics and mentions some of the celebrities who have taken part in the past. “It’s a fun thing to do!”. He also updates us on his family including his wonderful grandkids and he looks back over his 13 years as a teacher. It’s always a pleasure to spend some time with our dear friend and good pal Skinny! Then it’s over to our second interview with the village of Lyons’ Police Chief, Tom Herion. Tom and the other members of The Chicago Garda Pipes & Drums are hosting a fundraiser for Officer Danny Golden who was shot and paralyzed trying to break up a dispute. It will take place in the Irish American Heritage Center on September 25th from 1-9pm. Great music, good food and the craic! Then it’s over to our third interview of the show with Thom MacNamara. Thom is the Director of “The Boys of Kingsbridge” which is in this year’s Movie Hooley and he chats to Houli about the plot of the movie as well as how he came up with the idea of putting this project together because of his close group of childhood friends. Check it out at The Wilmette Theatre on Sunday, September 25th! Then it’s over to the recent obituaries followed by a quick trip to our favorite place known as “Houli-Town”.