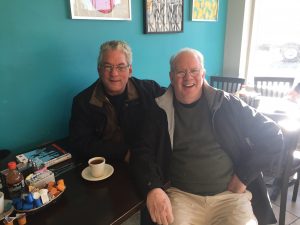 Fox’s Pizza, Guinness, the Cork and Kerry Irish Pub, Madden Funds and Flood Brothers Disposal present the Hibernian Radio Hour as we continue on our First Responders Tour at The Cork and Kerry Pub on Western Avenue and this week we welcome an old pal to the show, John Kass. John is a columnist, radio broadcaster and former Chicago Tribune editorial board member. He was born and raised on Chicago’s south side and attended Richards’ High school where he was a member of the Varsity Football Team as well as being on the yearbook staff. He studied Film at Columbia College in Chicago and worked as an Intern before becoming a Reporter at the Daily Calumet. John worked at the Chicago Tribune from 1983 to June 2021 before he left due to some disheartening circumstances which he delves into with Houli later in the show. He chats about his lovely wife, Betty and their twin sons who work as a teacher and electrician respectively. These good friends delve right into the political conversation beginning with the controversial topic of the “Defund The Police” movement and when asked about his outlook on our city’s future, John replies with “we’re circling the drain and there’s a deconstruction of everything that I hold dear…” These two also chat about their many friends in common, especially seeing as both were raised on the southside. John has plenty of stories to share from his time covering many events including the robbery of a $10K diamond from a downtown jewelry store where the robber ate the diamond. The police had to wait for it to ‘pass naturally’ and when it eventually did, John got a call telling him that “the eagle has landed!”. He has some hilarious stories from his extensive career that will give our listeners plenty of laughs! These two agree that revenge is one of the best motivators for anything and this is the reason why John can publish multiple columns every week when he’s motivated enough! There’s great banter between the guys as they share plenty of stories and memories together this week. John discusses his work life since leaving the Tribune and how he’s covering a lot more national stories. Check his incredible work out here! John continues on to explain what the Mountza gesture means and how both his sons were named after some of his great family members. “I’m not a professional Greek…” He calls himself out for supporting Lori Lightfoot at first but says his opinion has drastically changed since she endorsed Kim Foxx. “She has constantly demeaned and belittled the police..” Houli and John cover many other topics this week including the seriousness of receiving hate mail which both of them have experienced as well as who is running locally for Alderman. Houli ends the interview by encouraging John to “keep coverin’ it!”. Another insightful and interesting interview this week and we’d like to thank John for supporting us always! Houli brings us up to date on some upcoming Irish events including the screening of “In Search Of Weeping Jim” at the Irish American Heritage Center on Friday, October 7th. Then it’s over to obituaries followed by one last stop at “Houli-Town”.