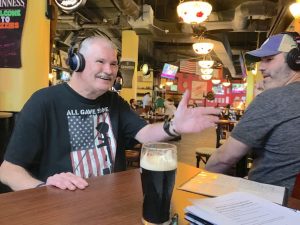 Alamo and his son, Bear

Fox’s Pizza, Guinness, the Cork and Kerry Irish Pub, Madden Funds and Flood Brothers Disposal present the Hibernian Radio Hour as we continue on our First Responders Tour at The Cork and Kerry Pub on Western Avenue and this week we take a look back at one of our favorite interviews from 2019 when we first met the local legend and recurring Hibernian Radio guest, James “Duke” Lynch AKA: Alamo!  Alamo is a U.S Marine Corps Vietnam Veteran and a retired 39 year veteran of the Chicago Police Department. He is a South Shore native who attended St. Philip Neri School and Lyons Township High School. This guy is a man of valor, Bronze Star recipient, having lost both knees in the war and still returning to combat after his recovery in Hawaii. It’s no secret that Alamo is a devoted fan of John Wayne, admiring him so much that he had to repeat the 5th grade because he skipped school for a full month to go see “The Alamo” 60 times in the theater.. He even took time off work to attend John Wayne’s funeral! This legend has been awarded more awards than we can count including the Friend Indeed Award for carrying two children out of a burning building as well as housing his neighbors after another fire. He spent 15 years as a bodyguard to Mayor Richar8 M. Daley and has many great stories to share from his long career including how he passed his entry test for the Police Academy, the time he was shot during a robbery and getting drunk at John Wayne’s house with the man himself. This guy is a real character with the heartiest laugh this side of the river! We’re blessed to be able to call such an incredibly inspiring guy a friend. Everyone here at Hibernian Radio wishes you a speedy recovery bud! Houli then brings us up to date on some upcoming events and that’s followed by the recent obituaries. Then it’s over to a musical break with “To Win Just Once” by The Saw Doctors. We end this week’s special show with a nice long trip to our favorite place known as “Houli-Town”.