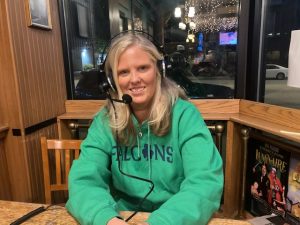 Fox’s Pizza, Guinness, the Cork and Kerry Irish Pub, Madden Funds and Flood Brothers Disposal present the Hibernian Radio Hour as we continue on our First Responders Tour at The Cork and Kerry Pub on Western Avenue and this week we welcome Krissie Ewers nee Kenneally to the show. Krissie grew up in St. Thomas More parish and spent 22 years working as a Registered Nurse at Ingalls Hospital. She now works as a Nurse Practitioner and tells Houli about receiving her Masters degree from Lewis University while still working at Ingalls Hospital. She is a die hard Chicago White Sox fan who she used to work as an Andy Frain usher. Krissie gives a shout-out to her 2 daughters, her Mom, sister and friends who came to support her at the show’s recording. She has 3 daughters and shares the story of when she met her husband Dan who grew up in a neighboring parish. This leads to Krissie sharing the lovely story of how her parents met. She joined the Army in 1989 right after graduating high school. Her Dad was in the Marines and Krissie says, “I always felt the need to serve..” She spent 4 years there and shares her experiences from Basic Training and working in the medical field. This wonderful southside lady has plenty of wild stories to share from her time so far as a nurse. “My craziest stories are in the civilian world!”. She begins by sharing a story about going to see Notre Dame play at Boston College and helping a gentleman on the plane journey who was experiencing chest pains. She has even helped a gentleman at the Cork and Kerry who had a stroke right in front of her! These two have plenty of friends in common and they both have their fair share of stories of some legendary southside folk. Krissie comes from a long line of police including her great-grandfather who was present during the Eastland tragedy on the Chicago River and his brother who drove Al Capone to and from jail.. Her cousin, Tommy Sweeney, was assigned to drive Mick Jagger to his concert in 1969 and her aunt was one of the first women to work on patrol. Her late father, Jim, was also a cop who joined the Force in 1967. She shares some of the important historical moments he witnessed including the riots of 1968 when Mayor Daley instructed officers to “shoot to kill”. She shares the story about how the kind folks at McNally’s didn’t charge any mourners for drinks after her father’s funeral and she shares many fond memories of her Dad with Houli and our listeners. A true Chicago legend whose family’s blood runs blue! These two have plenty to chat about and they reminisce about the southside, delving into some of their best stories of infamous southside characters. We’re delighted to have Krissie join us this week on Hibernian Radio. She’s a hoot and a true south sider! Houli brings up up to date on some local events including the Gaelic Park Players presenting “Outside Mullingar” on October 16th and 25th at Gaelic Park. Then it’s over to the recent obituaries followed by a quick trip to “Houli-Town”.