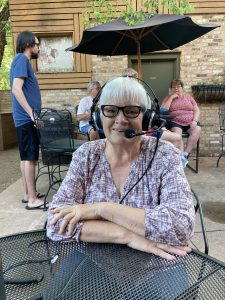 Fox’s Pizza, Guinness, the Cork and Kerry Irish Pub, Madden Funds and Flood Brothers Disposal present the Hibernian Radio Hour as we continue on our First Responders Tour at The Cork and Kerry Pub on Western Avenue and this week we welcome back our special guest host, Paddy Houlihan who is presenting the show for the second week while Houli is on his annual trip to Ireland. We also welcome returning guest CPD’s Eleanor Reardon to the show. Eleanor is a retired Detective Sergeant who worked 30 years on the job. She grew up in St. Basil’s parish and attended Queen of Peace followed by Daley College and Chicago State University. She and her husband Charles married in ’86 and have a son named Patrick. Eleanor admits that she’s not sure if she’d encourage people, especially her own son, to go into Law Enforcement. “Everything is so negatively judged with Police in today’s world..”  She and Paddy excitedly discuss Mount Carmel’s victory over Loyola in the football last weekend before returning to the police chat with Eleanor explaining how officers are assigned to districts based on their home address and sheer luck! She goes on to explain how difficult it was to not bring the job home with her at the end of the day. This legendary lady began her Law Enforcement career at the Cook County Dept of Corrections and discusses what led her to join the police, mainly because of her maternal grandfather’s influence who worked as a cop on 71st & State. She joined the Force at just 26 years old and talks about the reaction she got after telling her family.. She goes on to share how she and June Olsen were longtime partners and how they instantly clicked because they had similar work goals. “It’s like a marriage.. I was lucky I had June.” Eleanor started out in Englewood in ’84 as its first female officer along with June and she says their theory for the job was simply, “We’ll treat you with the same respect you show us!” After she was promoted to Sergeant, she returned to work in Englewood and chats to Paddy about how the majority of crimes committed there were violent crimes so she was certainly kept busy! Surprisingly, many of the citizens of the neighborhood were on the cop’s side and wanted a peaceful life in their retirement. Eleanor looks back over some of her worst cases including a woman who was almost decapitated and the horrific details surrounding that particular case. She also has her fair share of funny stories including a story about pulling someone’s wig off and another about meeting a guy named Ronald McDonald who broke her nose! Eleanor is involved in many groups including the Peer Support for the Police Department and she chats to Paddy about some of the duties she had helping out after the murder of Officer Ella French such as keeping everyone fed and taken care of. The Police Memorial store where Eleanor works is at 35th & Michigan on the 1st floor and she mentions that it is a great way to meet fellow officers who benefit from Peer Support. She talks about the absurd amount of calls she responded to regarding children being left alone and how they had diapers and clean baby clothes ready to go at all times. Eleanor truly is a fascinating lady and ends her wonderfully insightful and eye-opening interview with some advice to her fellow officers in need – Call Peer Support at 312-672-9973 or find Eleanor every Wednesday 9am – 3pm at the Memorial Store. We’re delighted to have her back with us this week! Paddy brings us up to date on some upcoming local events including free wills for First Responders at Wills for Heroes Association on November 5th, 8:30am – 2pm at 3510 S. Michigan Ave. Houli is back next week, folks so be sure to have a listen!