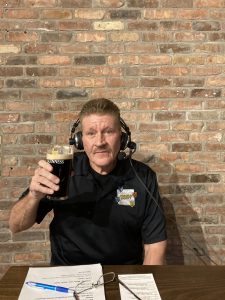 Fox’s Pizza, Guinness, the Cork and Kerry Irish Pub, Madden Funds and Flood Brothers Disposal present the Hibernian Radio Hour as we continue on our First Responders Tour at The Cork and Kerry Pub on Western Avenue and this week Houli is back! We also welcome back local CPD legend and good pal of the show, Jeff Lange. Jeff is a retired 30-year veteran of the Cook County Sheriff’s Police and is Vice-President of The Emerald Society. He was born and raised in Bridgeport where he lives with his wife Cathleen who is also a retired cop. He’s a De Le Salle graduate as well as an ordained minister and we’re delighted to have him return to the show for the 9th time! Jeff began working as the bouncer at Shenanigans in the ‘80’s and eventually began his career at Cook County Jail before going to work for the Sheriff’s police. These two begin by discussing the tough times for our officers right now and how the upcoming vote will influence politicians in the coming weeks. “Support from these politicians is zero!” – Jeff. Jeff chats about some of the Sheriffs he worked under including Mike Sheahan as well as his nickname, “Clubber Lange” and where that came from. He then dives into his time with the Metropolitan Enforcement Group, a task force that works in undercover narcotics and how he was always the first guy to enter during raids because “statistics showed that the 3rd officer in line was most likely to be ‘clipped’.” He spent 22 years as a Narcotics Investigator investigating drugs, guns, money laundering and murder-for-hires. He discusses some of those murder-for-hire cases and how he went undercover as a hitman. Jeff tells the story about a jail inmate who he met with to discuss putting a hit out on his wife. He needed a Polish translator to make the deal and in the end, the offender got 20 years and will be deported back to Poland after he serves his time. Jeff takes us through his own process of getting ready to go undercover including things like growing out his hair and leaving the monitored area for a while before going undercover. He explains to Houli what happened if you ran into friends or family while undercover or even if he ran into dealers in his everyday life. Jeff has seen the real underbelly of life and when Houli asks him about the connection between his faith and his work, Jeff replies, “You gotta have faith if you wanna get out of there..” We couldn’t get through an interview with Jeff without mentioning The Emerald Society and his dedication to the wonderful organization. Their ‘Annual Turkey Dinner’ is coming up on November 14th, 7pm at Lodge 7, 1412 W Washington Boulevard where there will be great food, music and they will be giving away scholarships as well as some other prizes! It’s great to have these two friends reunite and they end another wonderfully insightful interview by sending prayers to another dear friend of the show, Alamo Lynch. Houli brings us up to date on some upcoming events including “Tomaseen Foley’s A Celtic Christmas” with Eimear Arkins on November 30th at the Athenaeum Center. Get your tickets here! Then it’s over to the recent obituaries followed by a trip to our favorite place “Houli-Town” to end another great show.