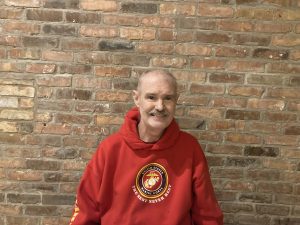 Fox’s Pizza, Guinness, the Cork and Kerry Irish Pub, Madden Funds and Flood Brothers Disposal present the Hibernian Radio Hour as we continue on our First Responders Tour at The Cork and Kerry Pub on Western Avenue and this week we welcome back one of our favorite guests, James “Duke” Lynch AKA: Alamo! Alamo is a U.S Marine Corps Vietnam Veteran and a retired 39 year veteran of the Chicago Police Department. He is a South Shore native who attended St. Philip Neri School and Lyons Township High School. This legend is a man of valor who was awarded the Bronze Star after he lost both his knees in the war and still returned to combat after a 3 month long recovery. It’s a known fact that Alamo is a devoted fan of John Wayne, admiring him so much that he had to repeat the 5th grade because he skipped school for a full month to go see “The Alamo” 60 times in the theater.. He even took time off work to attend John Wayne’s funeral! This local legend has been awarded more awards than we can count including the Friend Indeed Award for carrying two children out of a burning building as well as housing his neighbors after another fire. He joins us this week for his 10th visit and begins by sharing the unbelievable story of how he ended up at a party hosted by John Wayne while he was waiting to be discharged where he met celebrity and fellow Marine, Ed McMahon. Alamo attended Wayne’s funeral and even managed to find his way into the private section where he rubbed shoulders with celebrities like Jimmy Stewart and James Arness. He then moves onto the very serious topic of health and his current battle with Stage 4 cancer. He delves into the lead up to his cancer diagnosis and the treatments he has been going through lately. He also shares the admiration he has for his wife and kids, particularly now when he needs some extra help. “It’s a miracle, I don’t have any pain.” Alamo will be going in for his fourth chemo session next month and he is very hopeful for the future. “I’m not feeling sorry for myself. I’ve had a great life!” Death is the primary subject this week but we can count on these two pals to approach this somber topic with an Irish sense of humor. This Chicago legend is  hopeful for the future and is looking forward to planning a trip to Ireland early next year. “I’m gonna beat this. I’m not gonna go easy!” These two buddies then discuss the recent vote and Alamo explains why “The Alamo” is his favorite movie. He still has plenty of untold work stories to share with our listeners, even after ten visits and he shares some of them including responding to a call at the old McCormick Place where a worker was decapitated by an elevator. The search for a cure for cancer, the craziness surrounding the election and the book these two pals are writing together are just some of the many topics covered this week. It’s another wonderfully insightful show and Alamo ends his interview with the positive message, “Miracles happen everyday!” Then Houli brings us up to date on some upcoming events including the Emerald Society’s ‘Annual Turkey Dinner’ on November 14th, 7pm at Lodge 7, 1412 W Washington Boulevard where there will be great food, music and they will be giving away scholarships as well as some other prizes! Then it’s over to obituaries followed by a quick joke before we end another insightful week on Hibernian Radio!