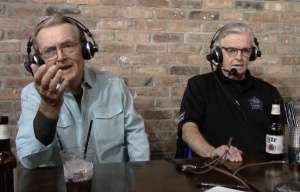 Fox’s Pizza, Guinness, the Cork and Kerry Irish Pub, Madden Funds and Flood Brothers Disposal present the Hibernian Radio Hour as we continue on our First Responders Tour at The Cork and Kerry Pub on Western Avenue and this week we take a look back at one of our favorite shows this year with brothers Dennis & Tom “Crash” McKenna. Both of these gentlemen are retired Chicago Police Officers with Dennis having worked on the Force for 33 years and Tom for 34 years. They grew up in St. Theodore’s Parish and attended St. Rita’s High School. They were both longtime members of The Bagpipes and Drums of The Emerald Society and Tom currently plays with The Shannon Rovers.. At the age of 17, Dennis began working in the FBI clerical office and joined the military in 1959 where he was stationed in Vietnam and visited many places with the Air Force including Bermuda, New Guinea and Thailand. On his return to the States, he took the Chicago Police test and the rest is history! Dennis chats about the days when he played music with The Doors’ keyboardist, Ray Manzarek and he reminisces about the band practicing in his front room pre-Doors era. Denny worked mainly in Patrol and at Special Events such as parades and large gatherings. Tom has been hailed as “Chicago’s Funniest Cop” and he worked as a Team Leader in Major Accident Investigation. He chats about the difficulty in having to contact over 400 people in his career to break the news regarding the loss of their loved ones. These two brothers chat about their families with focus on their late brother Mike who recently passed away and their only sister, Margaret. Their father worked for the CTA for 40 years and their grandparents hailed from Abbeyfeale in County Limerick. It’s safe to say the sibling rivalry is strong between these two and they are an absolute hoot because of it! They delve into a serious discussion regarding the current disconnect between society and the media. “If the story does not fit the media’s agenda, you won’t hear about it”. They also discuss how people take things too seriously these days which leads to an increasingly taboo joke battle between these  longtime pals. The brothers end their interview with their usual sarcasm, “Houli, it was nice trying to talk to ya!”. We always have a great time when the McKenna brothers join us! Then we head over to Houli’s recent interview with Eimear Arkins in Dingle during his recent trip to Ireland. Eimear grew up outside Ennis in County Mayo and she dives right into sharing her experience on the road with Houli and the rest of the tour group. “It’s giving people a slice of Ireland..” She then ends her interview with an acoustic version of “The Darling Girl From Clare”. Then it’s over to the recent obituaries followed by a quick trip to our favorite place known as “Houli-Town”. Don’t forget to get your tickets for “Tomaseen Foley’s A Celtic Christmas” with Eimear Arkins on November 30th at the Athenaeum Center. Happy Thanksgiving to all our listeners!