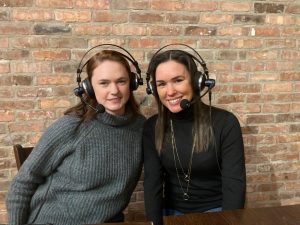 Fox’s Pizza, Guinness, the Cork and Kerry Irish Pub, Madden Funds and Flood Brothers Disposal present the Hibernian Radio Hour this week as we take a break from our First Responders Tour at The Cork and Kerry Pub for a unique show with special guest, Aideen Hand and her sister Sarah, who works as a Producer on the show. These ladies are from County Monaghan and they stopped by The Cork and Kerry during Aideen’s recent honeymoon trip to the States and even brought some fans along! Aideen is an Author, Director and Producer and chats mainly about her book, “A Subtle Sense“, which focuses on her spiritual gift. The craic is mighty between the sisters and Houli and they delve right into the topic of Psychics and people with ‘other-worldly’ gifts. Aideen begins by sharing one of her earliest unexplained experiences involving her cousin that is mentioned in the book and the sudden, tragic event that changed lives forever. She chats to Houli about how she was too young to understand what was happening, how supernatural gifts seem to be passed down through generations and their family ties to the Druids in their mother’s family. She also mentions that since publishing the book, “So many things have happened, your hair would stand on end!”. The Hand sisters delve into an incredibly interesting family story about their long lost Great-Uncle that was recently found by a Private Investigator and the unbelievable details surrounding that mystery including the ghostly encounters Aideen experienced leading up to the discovery… You have to hear it to believe it! Houli even shares some of his own personal experiences including the little ‘heaven wink’ he received from his own brother after he passed. Aideen worked as a housekeeper in the local Parochial House, cooking and cleaning for the priests and so, she has her fair share of hilarious and spooky tales from those crazy years including witnessing the aftermath of an exorcism! The sisters share some more ghostly encounters with the listeners, focusing on one particularly scary paranormal experience they experienced together almost a decade ago in Sarah’s college house. Aideen then delves into some of her upcoming media projects. why dreams are our safe place and the vlog series she produced called “Where To Wander?”.These three pals have a great time shootin’ the breeze this week. You can purchase Aideen’s book here! Houli then brings us up to date on the recent obituaries and that’s followed by one final joke from Houli-Town, told by special guest, Aideen Hand. Another great show with some incredible stories, folks!