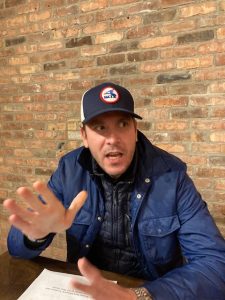 Fox’s Pizza, Guinness, the Cork and Kerry Irish Pub, Madden Funds and Flood Brothers Disposal present the Hibernian Radio Hour this week as we take a break from our First Responders Tour at The Cork and Kerry Pub for this week’s show with special guest, Paddy Houlihan. Paddy has a long-running podcast with his twin brother Billy called “The Houli’s Hooley“. This father and son duo begin the show by discussing the topic of doing things by themselves and they share stories about specific experiences they’ve had alone like going to the movies and eating alone. Driving at night is becoming difficult for Houli and he mentions a recent experience having to drive by himself at night after some social gatherings. Hibernian Media’s 5th Annual Hooligan Ball Fundraiser is coming up on December 18th at The Cork & Kerry and it’s guaranteed to be a night of great craic with music from the Larkin and Moran Brothers and more! – don’t miss it! Houli and Paddy then delve into discussing some of their exciting upcoming projects and new ideas for 2023 that will appeal to all generations. Social media and the online world will have a big part to play and as Houli says himself, “That’s the future!” Our longtime sponsor and dear friends over at Sheehy Funeral Home get a shout-out from Houli this week. It’s no secret that the Irish are great storytellers and the Houlihans are excited for the future of Hibernian Media and the new projects already in the works like their short online series profiling local “Irish Cultural Warriors”. Meeting new friends as an adult, dealing with getting older and the exciting future of Hibernian Media are some of the other topics discussed by these two gents. “I’ve been blessed with two very talented sons and a movie star wife!”  – Houli. Throwback to the comical “Who Cares?” segment from The Skinny and Houli Show and these guys bring it back for this week only! “Comedy comes from conflict…”. There’s great banter between these two throughout the show and the craic is mighty throughout! Lastly, Houli shares some of his most recent stories about some run-ins he had with ‘Houli Haters’.. We then head over to the recent obituaries from both last week and this week, followed by a well-needed trip to our favorite place known as “Houli-Town”. Another great show for you this week, folks!