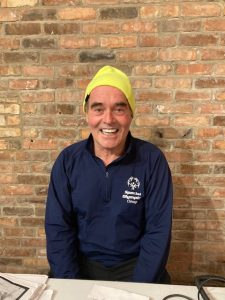 Fox’s Pizza, Guinness, the Cork and Kerry Irish Pub, Madden Funds and Flood Brothers Disposal present the Hibernian Radio Hour as we continue on our First Responders Tour at The Cork and Kerry Pub on Western Avenue and this week we welcome retired DEA agent and old pal from ‘The Skinny and Houli Show’ days, Rick Barrett AKA: The History Detective. Rick is a 4th generation Law Enforcement Officer – his great-grandfather worked as a patrol driver in 1894. He grew up on the South side and attended Brother Rice and UIC. Rick begins by discussing the long history of Law Enforcement in his family that dates way back to the 1800s. His Dad, Junior Barrett, was in Law Enforcement and he explains why he started with the DEA instead of CPD. His father didn’t want him to join CPD after he revealed that he had taken the test. Rick tells the story of how CPD called his father to ask permission to hire Rick and his father refused. He discusses doing an Internship at the Treasury Department and how he was hired as an Agent as soon as he graduated. Houli reveals that he took the CPD test in the late 60’s and placed 11th! Rick then dives into his time in France where he was involved in one of the largest drug busts in Law Enforcement history – The French Connection. The perpetrators fled France and continued to move drugs from other countries while on the run. He goes on to share the incredible story of catching them in a heroin laboratory as well as finding their storage facility with all the incriminating evidence needed. Rick mentions some of the differences between Irish and French agents and the difficulties in speaking a new language at work. He tells Houli all about the setup in Gare de Lyon where the package was placed in a locker and how he chased the suspect through the station, to no avail. These two pals practice their French throughout this week’s show! Rick goes on to discuss his return to Chicago with the DEA where he ran a Gang Task Force that targeted the drug leadership such as Larry Hoover. He explains how they caught him red-handed with a hidden microphone in a Visitor’s Badge and how they recorded Larry incriminating himself.  This local legend retired from DEA in 2003 at 50 years old but still works as a Contractor with a private company that has a contract with the Department of Justice, specifically the many US Attorney’s Offices around the country. He then discusses the devastation surrounding officers who are killed on duty and he delves into the history behind the first recorded officer deaths. Rick mentions how great the internet is in his investigations and he recalls how he discovered previously undocumented and unknown line of duty deaths. He brings us up to date on his latest discoveries in his research and he ends another wonderfully insightful interview with some advice for our officers still on duty. Houli brings us up to date on some upcoming events including Hibernian Media’s Annual Hooligan Ball at the Cork and Kerry TODAY! Then it’s over to the obituaries followed by a quick joke from the birthday boy himself – Happy Birthday Houli!