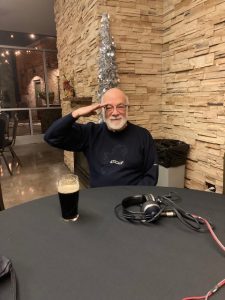 Fox’s Pizza, Guinness, the Cork and Kerry Irish Pub, Madden Funds and Flood Brothers Disposal present the Hibernian Radio Hour as we continue on our First Responders Tour at The Cork and Kerry Pub on Western Avenue and this week we welcome retired CPD Don McGrath. Don grew up in Little Italy, his mother came from around Milan, Italy and is father’s family hailed from Galway in the west of Ireland. He was an only child and his family and friends are in the audience supporting him this week. Don begins by chatting about how he took the Police Test in 1974 and joined Chicago’s Police Department in 1976. He began in the 15th District and describes it as “a calling, not just a job..”. These two guys give credit to Mayor Byrne and her hand in the creation of The Emerald Society and the Pipes & Drums in Chicago. Don was the 3rd Pipe Major in The Emerald Society’s Pipe & Drums and he describes what it was like learning as well as teaching within a band. He chats to Houli about Pipe Band Grading and the importance of the Midwest Pipe Band Association. Don worked in the 15th, 6th and 10th District as a Patrolman before broadening his field of expertise and joining Area 4’s Gang Crimes Unit which was the unit responsible for the entire west side of the city. “I whimsically thought that helping my fellow man in defending against the evil in the world might be something worthwhile.” Don passed the Detective’s Test and went to Area 3 where he worked for a year and a half. He then moved to Area 2 where he worked midnight, had a regular work partner and like Don says himself, “Life was good!”.He spent some time teaching at the Academy but later returned to Area 2 in ’96 where he dove right into the case of the Wolf Lake murders. He discusses the careful approach they took with the investigation and he chats about some of the techniques that helped them solve the murders, particularly the importance surrounding DNA back then. The murderer was finally caught and Don tells Houli about how the case played out after he was sentenced to death. You have to hear this story to believe it! These two end a wonderfully insightful interview by discussing how the Police Department used to be and the changes that were made over his 38 years on the job. We’re honored to have Don on the show and will have to have him back to share more of his war stories! Houli shares some upcoming local events including ‘Irish Rebel Fest’ – a fundraiser for Officer Danny Golden on Feb 26th at Gaelic Park with music from Derek Warfield and the Young Wolfe Tones. The Emerald Society will also be having their Annual Chilli Cook-Off at FOP Hall Lodge 7 on Monday, January 23rd. See you all there! Houli then brings us up to date on the obituaries and then it’s over to our favorite place known as “Houli-Town”.