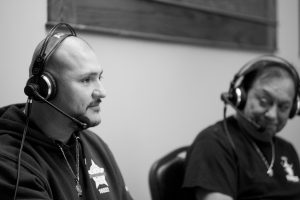 Fox’s Pizza, Guinness, the Cork and Kerry Irish Pub, Flood Brothers Disposal and Chicago Firefighters Union Local 2 present the Hibernian Radio Hour as we continue on our First Responders Tour at The Cork and Kerry Pub on Western Avenue and this week we are honored to be able to welcome two very special guests and honorary Irishmen, Carlos Yanez Jr. and his father, Carlos Yanez Sr. Carlos Sr. grew up in the Pilsen area before moving to Little Village. He tells the story about keeping the CPD test a secret from his wife and how she took the test 2 years after him and was recruited by Cook County Sheriff’s Aviation Police where she currently works as a Sergeant. Carlos Sr. retired in 2018 and now works as a Merchant Marine Captain. Carlos Jr. attended St. Rita High School and always knew he wanted to be a Cop. He begins his interview by taking a moment of silence for our fallen officers and he thanks his fellow officers and the hospital staff who tended to him on the night of this unforgettable tragedy when he was shot and his partner, Ella French, was killed. He takes us through his recollection of that fateful night from the moment the shooting began to  being rushed to the hospital by his fellow officers. He describes the extremely severe injuries he sustained which has left five bullets in his body – he is a fighter! “My Dad raised me rough!”. Carlos Sr. interjects to talk about when he got the news that an officer was deceased and the agony of not knowing if it was his son or not. He describes the fear he felt but the strength he had to muster up to take care of his family. “Those first few days were the darkest of my entire life”. His daughter, Nicole, is a doctor and luckily was able to provide regular updates on Carlos’ condition to the rest of the family. Carlos Jr. then spends some time talking about his friend and partner, Ella French, and he remembers her fondly what it was like to work with her. He tells Houli that “John Catanzara is a man of his word” and he explains how the FOP has been such a huge help to their family during this horrific time. Carlos Sr. mentions that their family didn’t receive any correspondence from any city representatives until days after the tragedy. Carlos Jr. outlines the problem with a lack of accountability on the Force saying “It’s a difficult time for pro-active officers..” and “they’re catering to the criminals!”. This father and son duo discuss the importance of family in dark times, the dangerous side of the media who mistakenly reported that Carlos Jr. had passed as well as politicians overstepping their boundaries to gain exposure. On a positive note, Carlos Jr. is in recovery and chats about the amazing rehab therapy he attends. “God is good!”. All 3 of the guys agree that faith, family & friends are the most important things during times like these. Carlos Sr. ends this eye-opening interview by thanking everyone across the globe who have reached out to their family. Please donate to help Carlos and his family! Houli brings us up to date on some upcoming local events including the 4th Annual Hooligan Ball on Saturday, December 18th at The Cork & Kerry. Then it’s over to obituaries followed by a quick chat with our old pal and 2nd Vice-President of the Emerald Society, Jeff Lange. Jeff chats about the Emerald Society’s online store, the Pipes & Drums and some of the upcoming changes including their new President, Daniel Kearns. The craic is great between these two friends and Houli ends this week’s show with a joke dedicated to Jeff.